Enjoy a guided night walk through the Town of Easton, historically the “Eastern” capital of Maryland. Hear about the spirit of Marguerite, the murdered actress found in the elevator of the Avalon Theater. Learn about Mr. Grymes who is still demanding fine service of the staff at the Tidewater Inn. Meet “The Colonel” who haunts the courthouse and the phantom man in a blue suit who rides the elevator in the old jail. Hear how the spirit in the old Odd Fellows hall has “touched” the staff at the Clay Bakers. Visit the Home of the Friendless, the Eastern Shore’s oldest orphanage and listen for sound of Solomon Barrett playing his fife and drum in the old cemetery that also has two “healing trees.”  The scariest stop of all will be at Foxley Hall, the most haunted house in Easton where mist and fog frequently appear inside the kitchen and living area, and where the screams of a woman are sometimes heard from a 3rd floor room.  You’ll learn much about Easton’s history and more about the spirits that still hang around.

SITES ON THE EASTON GHOST WALK include the Talbot County Court House and old jail, Tidewater Inn, Avalon Theater, the old Easton hospital, the Odd Fellows Hall, the former “Home of the Friendless” which once served as an Eastern Shore orphanage and Foxley Hall – the most haunted house in Easton.  Also included is a walk through Spring Hill Cemetery, a place where 10,000 Eastonians are buried.

PLEASE NOTE: WE DO NOT GO INSIDE THE PROPERTIES.  This is a ghost walk where stories of hauntings and unexplained events are shared while standing outside the property.

Your walk is led by a storyteller who talks about Easton’s haunted history and the spirits that still hang around.  “I have never spoken to a staff person in the Tidewater Inn who didn’t have a personal encounter with – or at least know about Mr. Grymes” states Mindie Burgoyne, author and tour guide.  “Mr Grymes is a popular Easton ghost.”

When the old Avalon Hotel – a Victorian hotel that once occupied the same site as the Tidewater Inn – burned down in 1944, the space on the corner of Dover and Harrison Streets remained vacant until 1947 when Arthur J. Grymes, Jr. broke ground for a new – all brick – hotel.  The Tidewater Inn was completed in 1949 and operated under Mr. Grymes’ guidance.  He carefully ran the hotel until the day he died.  But hotel staff from cooks, to bellman, to General Managers have all claimed to see Mr. Grymes walking the halls, climbing the stairs and entering the lobby. 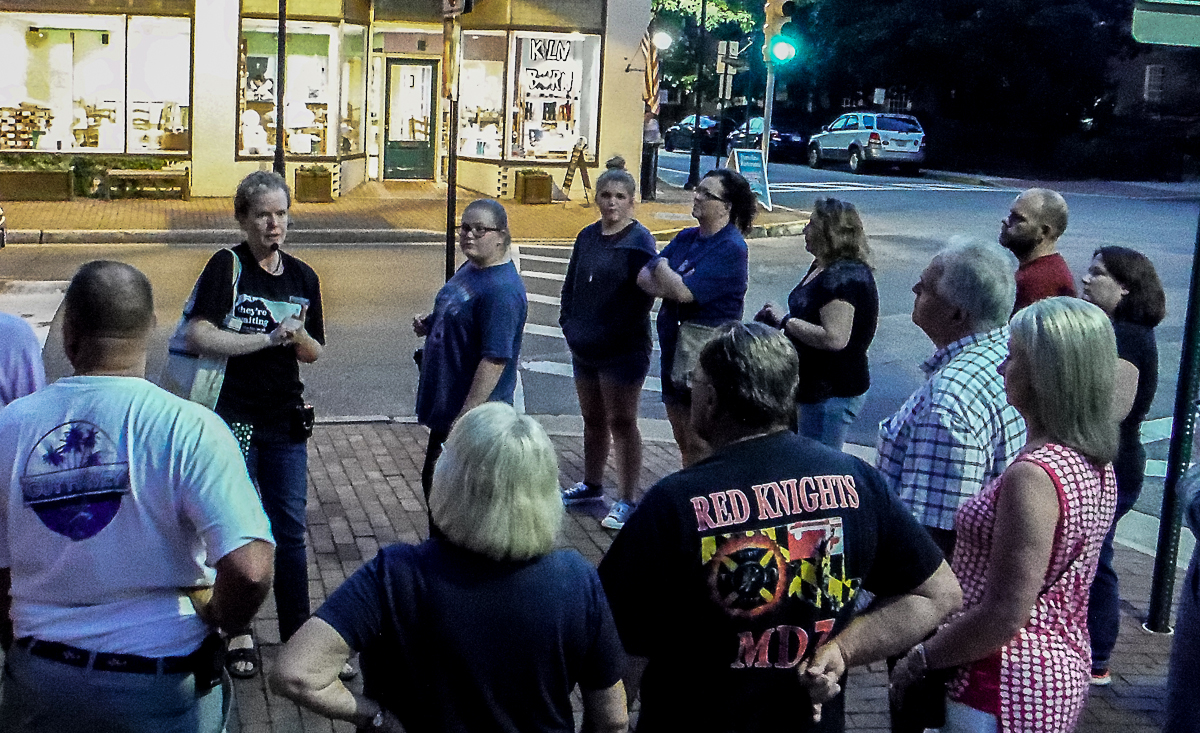 The Tidewater Inn is just one of the haunted properties on the walk.  The Avalon Theater and stories of a ghost that rides the elevator will also be a highlight.  And the old Home of the Friendless that was formerly a large house where orphans from all over the Eastern Shore were placed.

Easton is approximately 30 minutes east of the Chesapeake Bay Bridge.

MEETING PLACE:  Meet in front of Tidewater Inn at Dover and Harrison Streets.

TIME & WEATHER: Ghost Walk begins on time. We walk in all kinds of weather except heavy rain and thunderstorms.  Dress for the weather and be aware that each ghost walk takes at least an hour and covers between 1 and 1.5 miles.

CANCELLATIONS AND REFUNDS:  Full refund will be given if cancellation is made 48 hours prior to the tour’s start.  If cancellation is NOT made within 48 hours of the tour, no refunds will be given. For reservations of 6 or more, we require 72 hours.  However, all registrations are transferable, so feel free to allow a friend or family member to attend in your place.  Just give them your order voucher.