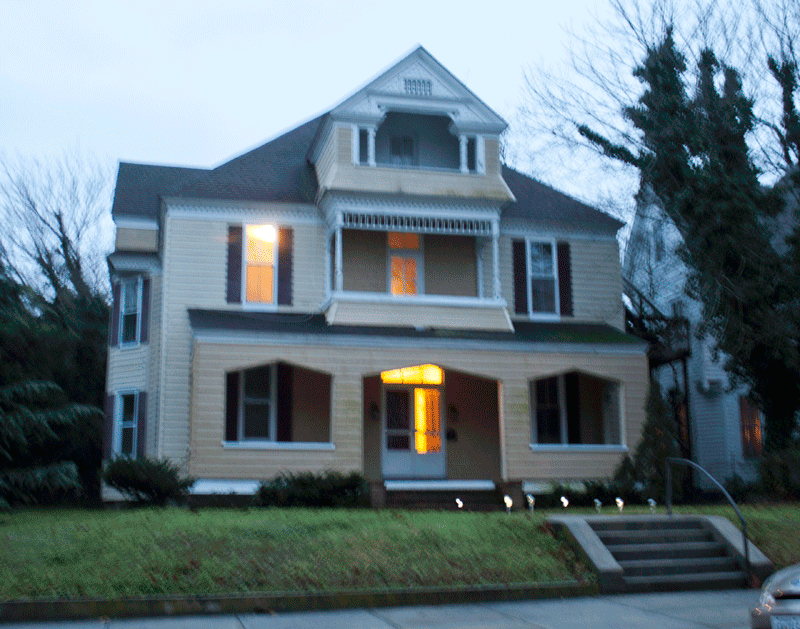 An old lady and her beloved cat are remembered in this house on High Street in Cambridge.

The house, known as the Bayly Orem House, was built in 1888 and was occupied by a very a lady who grew old in the house and like many older people, she became set in her ways. She lived alone with her beloved cat who was her constant companion. When people visited – including her own family – she denied anyone access to the front parlor and resolutely refused to use it herself. She kept it meticulously cleaned and dusted it compulsively.

According to a neighbor, the old lady fell down some stairs and couldn’t reach out to anyone. It was her devoted cat who made its way outside to notify people of the lady’s fall. Sadly, help arrived too late and the lady died from her injuries at the foot of the steps in this house.

And where do you think her family laid her body out for visiting friends and relatives?

Right – the front parlor. They figured it would be appropriate since it was the best room in the house and it would no longer offend the lady to use it because her spirit had already passed into the next world.

After the visitations, the family went home leaving the deceased woman’s body in her front parlor. When they arrived the next morning to transport the body for the funeral they found the door to the parlor locked – the kind of lock you need a skeleton key for. The key was nowhere to be found, in fact relatives didn’t even remember there being a key.

There was no choice except to break down the parlor door. When they entered the room, the key was lying next to the casket … and the old lady’s cat was right beside it …. purring.

Today, the Bayly Orem House has been subdivided into apartments. A guest on one of the walking tours admitted that she was a tenant in the house and her room was the front parlor. “Yes” she said. “There was a ghostly presence in that room.” The guest said books would get knocked off her shelf while she was sitting in the room, lights would flicker on and off and she could hear the faint sound of laughing.

The Bayly Orem House is on the Cambridge Ghost Walk. Join us for more an up close look and more on this story.