The building that is now the Robert Morris Inn in Oxford – Talbot County, Maryland – dates back to 1710.  It was always an inn or tavern.  During the earliest part of Maryland’s Colonial period, Oxford was the state’s 2nd largest port city (2nd to Annapolis).  It was a thriving and booming town for the time.

“Room 1 Checked Out. It is TOTALLY HAUNTED. I left at 5:50 a. m. Here is what I experienced. Light next to bed turned off. Heavy man got in bed next to me. He was raging with fever. I woke up saturated in sweat. British man talking about Jenny. British man talking about the Hog Roller. Saw man lying on floor beside bed with a soldier standing over him. Then the bed began to rock violently like a roller coaster. I kept trying to yell for help but could not get my mouth open. Opened my eyes and saw a roach crawl up the left bed post. That was it. That room has an energy vortex. It is holding the energy from Man’s death. Sorry to miss breakfast. I am out of here.”

After talking with the Innkeeper it is likely that Robert Morris died in that very room. That room would have been the likely room where a sick person would have been nursed back to health …. or passed away.

Robert Morris was accidentally struck by the wadding of a ship’s gun that was fired in his honor. The wound festered until the infection killed him. He died at his home which is now the Robert Morris Inn. 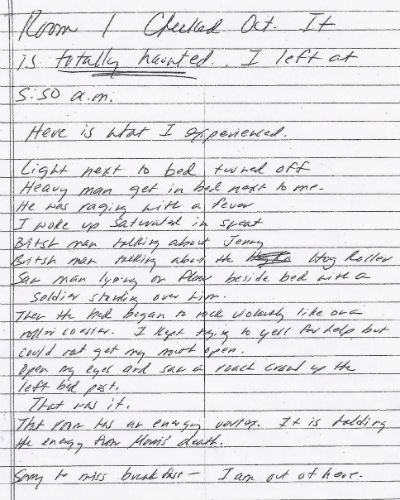 1 thought on “Robert Morris Inn – Guest Flees in the Night”